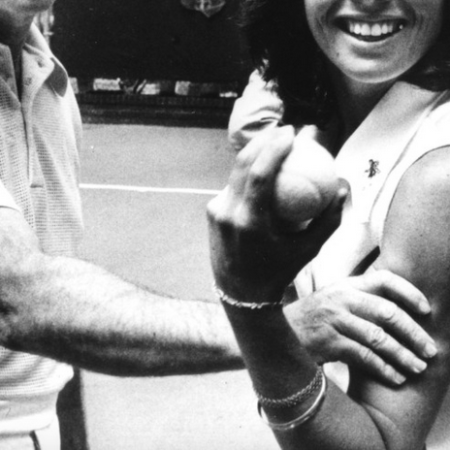 A little while back someone close suggested that an unfolding drama in my life could provide “new material.”

I was taken aback by this and also surprised that my work could be so misunderstood.

In reality, I hide from new “material” for fear it will ask more than I have to give. I even avoid movies; unless my husband gives me those puppy eyes.

That’s how I ended up at Battle of the Sexes last night, lured by the idea that I knew how it played out.

I was 9 years old when King beat Riggs.

And I was only vaguely aware when I said yes to my husband that there was some unprocessed “material” inside me that accompanied that victory.

As Billy Jean King’s story unfolded on the screen, the past crept in around me, like a dense fog; and increasingly, I felt the inexplicable urge to flee the theater, or sob, or collapse right there on the floor with the sticky soda and the popcorn kernels.

Those actors made it easier to bear the flood of past, although when Howard Cosell wrapped his arm around his co-announcer at the match, and put his microphone in front of her mouth every once and awhile so that she could add something, I could barely sit still in my seat.

What was most sublimely awakened by the film was the way I thought of not men, but of Billie Jean King back in 1973; which of course was the way my father thought of her, or the way my mother said nothing, and the way the media portrayed her.

Any pride I felt in her win was polluted–with distaste–for her manliness and aggression; and toward my own emerging capacity and drive (not to mention a culturally inadequate interest in appearance.)

Unlike some of my fellow movie goers, I couldn’t clap when King dominated the court because I was too appalled at the circus that accompanied her efforts. And still does. And how slowly that has shifted in my 53 years.

I was there in 2016 when two-time Olympic gold medalist and FIFA Women’s World Cup champion, Abby Wambach, addressed the United Nations Commission on the Status of Women (CSW) regarding the continuing inequity of compensation–40 years after King and friends fought for it.

When the credits rolled, my husband attempted to smile at me, as if to say, Isn’t it grand–a woman beat a man.

I likened it to him inviting his black friend out to view his unlikely triumph over a white man.

This brought to mind an incident between us at the farm stand a few weeks back when some tourists asked for directions. I began to tell them to drive up the road, turn left, then right, only to have my husband begin a set of directions of his own, talking over me.

I watched as both women immediately turned from my voice to his.

I pointed this out to my husband when we were back in our car. He was defensive at first, and then he apologized, adding: “Your directions would be just as good as mine.”

Sexism is so insidious that it is hidden in the most considerate of men, and in women, like me, who don’t fully realize how we’ve been raised to defer to men and to hate ourselves for anything beyond looking pretty, which of course only lasts until we begin to age.

I learned to play tennis in school after King’s win. We were living on the base at West Point at the time–the same year that women were admitted to the Academy. I watched as their heads were shaved on the courtyard. And I remember looking down in gym class, a blue racket in my hand, noticing for the first time, that my legs were hairy and needed shaving.

Although I continued with tennis into high school, I was never any good at it, much to the dismay of my grandfather, the surgeon, who hoped to play doubles with me.

My grandmother’s game was golf, and she had had her own righteous moment riding King’s. She challenged the bank sponsor of a PGA tournament in Philadelphia.  Given her bold voice and societal status, she and her friends became the very first female Marshals.

My grandmother had been born just as women secured her the right to vote. And her dream as she came of age was to work at the newly formed United Nations. But the lack of birth control and choices for women at that time meant that she dropped out school ahead of her senior year at Douglass to become a full-time mother, like her mother before her, who left her beloved work as teacher, as she was expected to do, once wed and pregnant.

On their behalf, and on behalf of my mother and her people (Irish Catholics) who didn’t have the privilege of income and education that I shared with my paternal grandmother and great-grandmother (Protestant), I feel a debt of responsibility to my voice, and to that of women around the world; while despairing that at the current rate, the UN indicates that the elimination of gender inequality will be possible by the year 2095–when my unborn granddaughters will be decades older than I am now.